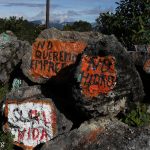 In addition to her public lecture, “Beyond Adequacy”, during her stay at UBC Diane Nelson will also be leading two workshops:

“Before and After/Math”
March 12, 2014, 11:30am
Board Room, Liu Institute for Global Issues
Light lunch will be provided.

This workshop will focus on Dr Nelson’s most recent work on post-genocide repair and the new Mayan rights struggles. Dr Nelson will provide the introduction of her upcoming book Who Counts? Quantity’s Qualifications and Mayan Organizing 2.0 in Guatemala’s After/math for students and faculty to review and discuss.

Please RSVP at http://fluidsurveys.com/surveys/liuinstitute/register-diane-nelson/ to receive the reading for discussion by Monday, March 10. Note that space is limited.

This second workshop will take place at either the Liu Institute or the UBC Farm House. It will focus on the language and imagery of dirt as both a thing (soil, earth, what feeds us) and a metaphor of a person or a communities’ subjective positioning. We will ask participants (faculty and students) to bring a thing and/or image from their own field sites for the ‘dirt museum,’ and use it to create a critical dialogue on the usage of dirt.

Please RSVP at http://fluidsurveys.com/surveys/liuinstitute/register-diane-nelson-playing-with-dirt/ for further details by Monday, March 10. Note that space is limited.

Diane Nelson is Associate Professor of Cultural Anthropology at Duke University and author of A Finger in the Wound: Body Politics in Quincentennial Guatemala (University of California Press, 1999) and Reckoning: The Ends of War in Guatemala (Duke University Press, 2009). Her work examines the impact of civil war on highland indigenous communities, with a focus on the more than 100,000 people made into refugees and 200,000 people murdered, seeking to understand the causes and effects of this violence, including the destruction and reconstruction of community life. She draws on popular culture like jokes, rumors, global TV, and subjugated dreams of a “new race” as well as contemporary theories of political economy, subject-formation, the post-colonial, memory, and ethnic, national, gender, and sexual identifications. Some of her more recent work focuses on laboratory and clinical research on vector and blood-borne diseases like malaria and dengue and the intersection of this knowledge production with health care in the midst of neoliberal reforms and popular demands.

Organized by the Liu Institute working group on “Latin America and the Global.” Co-sponsored by the Transitional Justice Network, Latin American Studies, Green College, and the Museum of Anthropology.